Very good conditioned bayonet with double edged blade and scabbard, no other marks then "W", which presumably stands for the maker Weyersberg, Kirschbaum & Co. This mystery Bayonet has been described a the M1907 bayonet which was intended for the kingdom of Siam (Thailand). This one however was used by the German Kaiserreich as ersatz bayonet (EB149) during WWI. These were issues to the Landstu... read more

A very nice bayonet made by the North West Railway in 1942. See markings bayonet N.W.R. 42 II *. Pommel with oil hole, crossguard with muzzle ring. Pommel is marked (5A/5C) if read correctly. The blade has a false edge.

Scabbard is made of black leather which is stapled to blued metal fittings. One staple is missing on the lower metal fitting but this has absolutely no influence... read more

The bayonet was partially altered by the Germans during the occupation of Czechoslovakia. The muzzle ring was removed, blued, screws slotted, release but... read more 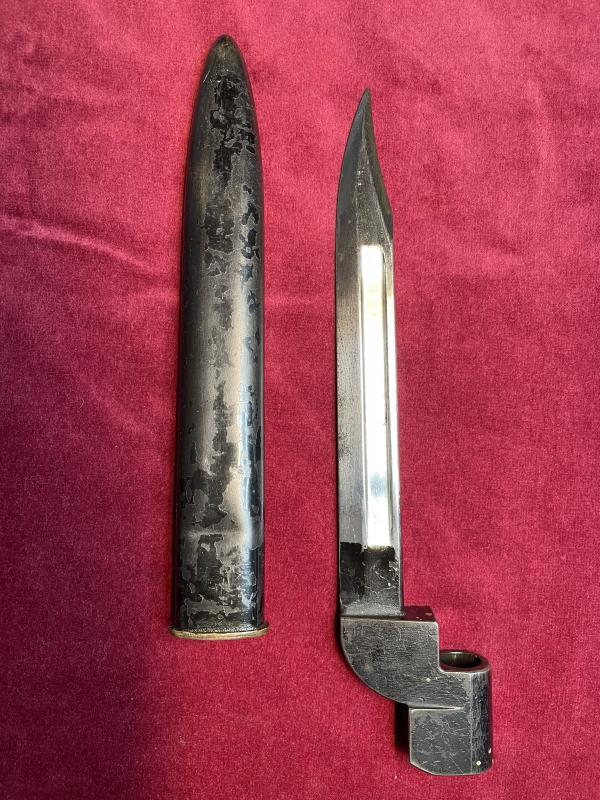 This is the No. 9 socket bayonet which fitted the Lee-Enfield no. 4 rifle and is in very good condition, the scabbard has a few dents, it has been blued in the past and painted but the paint has let go on several places.

Production commenced in 1947, even before the No. 9 Mk. I bayonet was officially approved. No. 9 bayonets were also produced in Pakistan and South Africa. read more

Blade is marked with "Modelo Argentino 1891 (only the 891 has been wiped) and arc over Argentine crest with number B1009 (a very low number). Otherside of the blade clearly visible mark Weyersberg Kirschbaum & Co. Solingen.
On the cross guard a "C" and on the pommel a "RA" inside an oval. RA sta... read more

A very nice Swiss bayonet M1918 (Schmidt-Rubin) made by the Elsener Schwyz.
The blade is numbered 601847 and has the makers mark. The cross-guard has on the bottom a Swiss cross marking and a circle.
The scabbard has been blued but painted over in the past, that paint has been lost on some places.
Frog is stamped with an "A" inside a shield, and with the maker JOS.ERNI Sa... read more

A very nice Swiss bayonet M1918 (Schmidt-Rubin) made by the Waffenfabrik Neuhausen.
The blade is numbered 708169 and has the makers mark. The cross-guard has on the bottom a Swiss cross marking and a circle.
The scabbard is very nicely blued, on the side and on the mouth of the scabbard there is a "P" marking.
Frog is stamped with the Swiss cross inside the weaponshield, a... read more

Bayonet is numbered 2542 which would be the same number as the rifle and only then be provided to the military. The blade is marked with the maker Neuhausen SIG and is the first model of this bayonet. Later this company changed their name to Waffenfabrik Neuhausen.
below the cross-guard a swiss c... read more