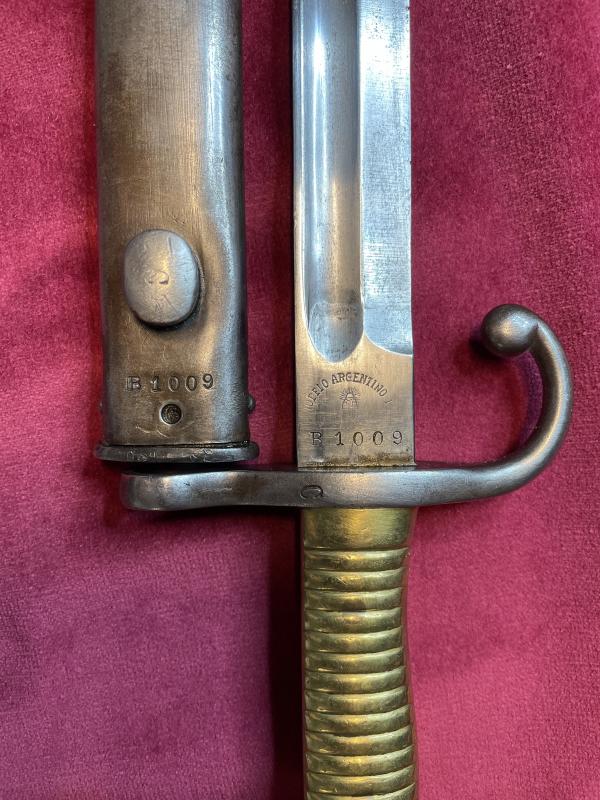 Blade is marked with "Modelo Argentino 1891 (only the 891 has been wiped) and arc over Argentine crest with number B1009 (a very low number). Otherside of the blade clearly visible mark Weyersberg Kirschbaum & Co. Solingen.
On the cross guard a "C" and on the pommel a "RA" inside an oval. RA standing for Republic Argentine

Sword bayonet for use on the 7.65 mm. Argentine M1891 Mauser rifle.
The rifle with which this example was issued was made in 1900 by Deutsche Waffen-und Munitionsfabriken (DWM).

Most have aluminum alloy grips. Some have brass grips (like this example). There has been a lot of fiction spread regarding the brass grips being for the Navy, for NCO's, and the like. None of that is true. According to Webster's well-documented book on Argentine Military Rifles:

The aluminum grip scales were part of an effort to lighten the bayonet. The grip metal is an alloy of aluminum, with 6 percent copper.

Argentina opted for the 15.75 inch blade, after seeing that Chile was going to adopt a shorter (10-inch blade) bayonet for their Mausers. However, the prototype bayonets turned out heavier than the Argentines liked, so they made a number of design changes (thinner blade, slimmer hilt, and others).

Most M1891 rifles and bayonets were exported to the USA in the 1950s and 1960s, when Argentine export laws required that the national crest be ground away before being sold.